Founded in April, 2013, PEACE Punta de Mita, is a non-profit organization located on the North Shore of the Bay of Banderas in the State of Nayarit. The area comprises the communities of Emiliano Zapata, Corral del Risco, and Higuera Blanca. The charity was founded by a small group of part time residents, and its operations are funded through an increasing base of caring people from Mexico, Canada, and the United States of America.

Board of directors chair and management oversight committee

Ron joined the PEACE Board in April 2018. His community service began in 1991 by chairing an Upstate New York consortium of business, academia, and government to better a county of 250,000 people. In the mid 2000’s he led the philanthropic efforts to give aid and comfort to the mentally challenged, abused and abandoned children, and the elderly of a Caribbean Island. He was elected to the PEACE Chair in April 2019.

Head of Finance and Treasury

Gordon joined the board of directors in April as the head of Finance and Treasury. Gordon brings a wealth of experience with a broad career of leadership positions in the financial industry in Canada, the United States, and in Europe. In addition, he has given freely of himself serving on various not-for-profit boards, including being past Chair of the United Way of Calgary and past Chair of the University of Calgary.

Mariette has served on the PEACE Punta de Mita Board nearly since its inception, and has interfaced with multiple committees during her tenure. She has served on fundraising committees with various non-profit organizations and focuses her philanthropic endeavors primarily on education.

Louise joined the PEACE Board in April 2018. In Toronto, Canada Louise served as a director on many non profit charities, including the Canadian Breast Cancer Foundation board for 10 years and the Leacock Foundation for 9 years.

Director and fund raising committee and angels committee representative to the board.

Margaret joined the PEACE Board in April 2019 and brings a wealth of experience from the for-profit and non-profit sectors, both in Canada and California. In addition to the PEACE Board, she serves as a Director of the Punta Mita Hospital Foundation.

Bob brings to PEACE a vast amount non-profit experience in Toronto, Canada, including: Chair Emeritus, Royal Ontario Museum Board of Governors; Trustee of The University of Guelph; Prostate Cancer Research Foundation Board; and Tarragon Theatre Board. Bob is a member of the Board of Directors of the Fraser Institute, an independent non-partisan research and educational organization based in Vancouver.

Roberto joined the PEACE Board in 2014 and has served on multiple committees. He has served on the Board of The American School in Guadalajara. He is a member of YPO/WPO, and founder of the YPO Chapter in Guadalajara. In the Punta Mita area he was one of the founders of The Punta Mita Foundation. He has participated in the Vigilance Committee of Hacienda de Mita, and was past President.

Juan Pablo (JP) Stone has been a lifelong resident of the greater Puerto Vallarta-Riviera Nayarit area. His architectural and construction company, Stone Contractors, is a preeminent builder of many of the best homes both inside and outside of the gates of Punta Mita. He has a reputation of honesty, integrity, commitment, and excellence in all he does. In addition, JP was an early on prime mover for charitable works in the area and most recently, he has supported PEACE Punta de Mita by developing concepts and volunteering the expertise of his company. JP and his wife, Celeste, reside with their beautiful family in Nuevo Vallarta, and they are also members of the Punta Mita community. 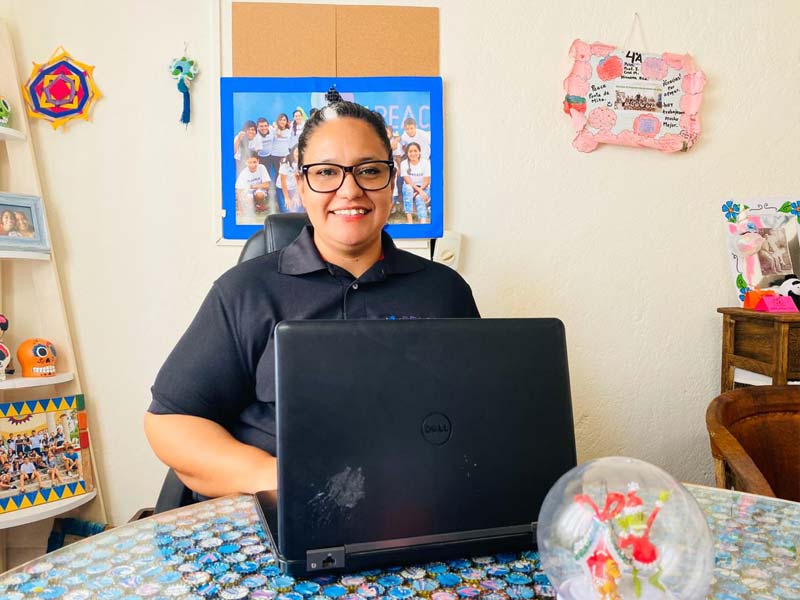 One year after she finished her law degree in Tepic, Ali moved to the Punta de Mita area in 2005. It is through joining the former PEACE that Ali found her vocation as a full-time teacher at Avanza. In April 2015, Ali was promoted as Education Coordinator and in 2017, Ali took the position of Executive Director. 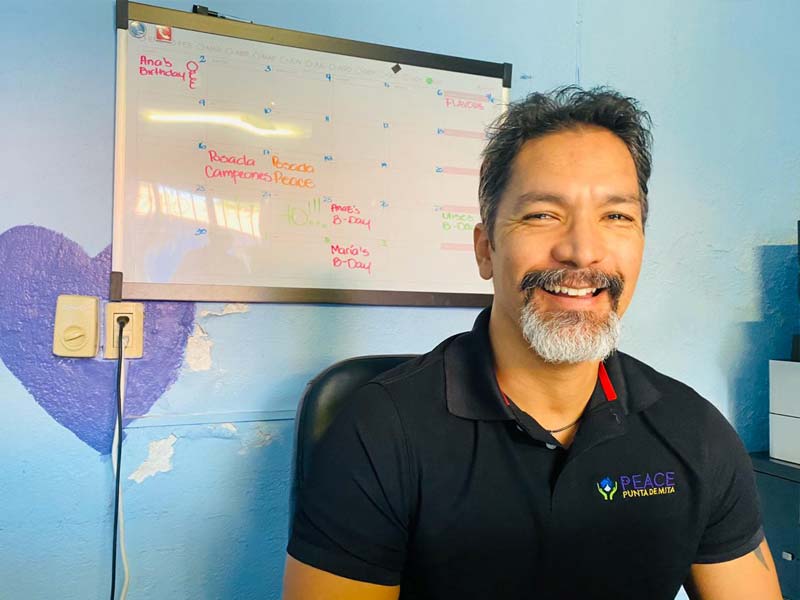 Omar was born in Aguascalientes. He studied accounting at the UASLP graduating with a diploma in finances. He has worked in various places as an administrator within the Bahía de Banderas region such as PSAV at Four Seasons Resort Punta Mita and Wildmex Surf School. Omar started to work for PEACE in 2018 as an administrative assistant and, after a year he was appointed as Administrator and HR. 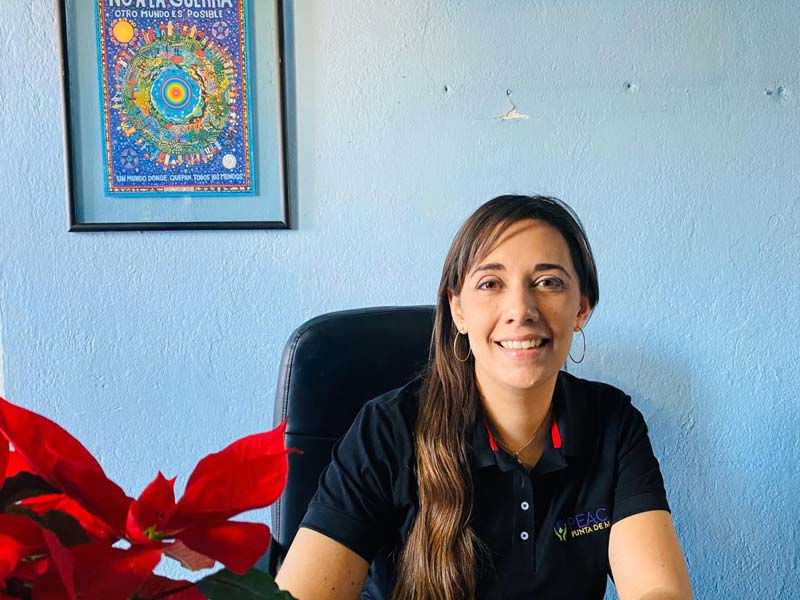 Anaelena was born in Venezuela. She and her family have been resided in Nayarit for the last 8 years. She has 16 years of experience in the education field, working as a teacher, coordinator, and director of pre-school and primary levels. She also has participated in conferences pertaining to values and ethics for various social and educational entities. 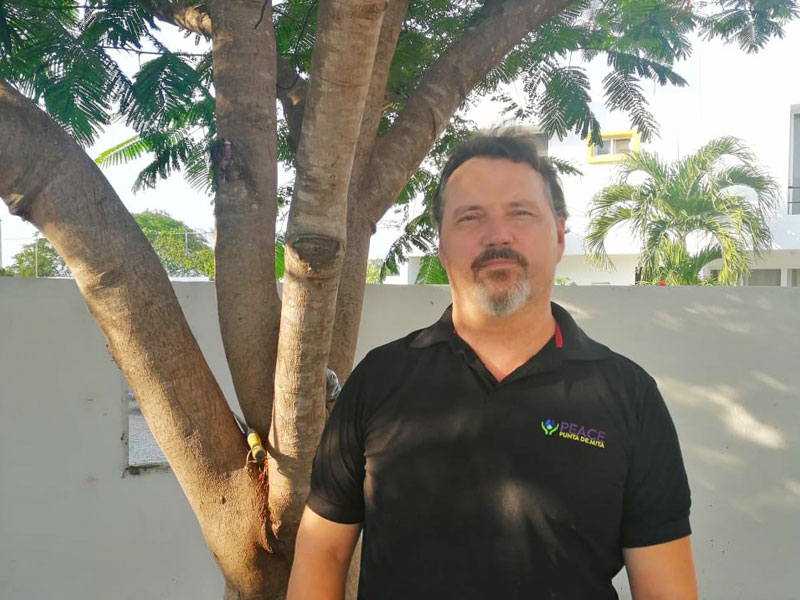 Rob is from Bozeman, Montana and holds an M.S. TESOL from Aston University in the U.K. He works as a teacher trainer, most recently for The British Council in Tunisia. He contributed to the third edition of Jack Richard’s Curriculum Approaches In Language Teaching among other publi-cations. Rob is passionate about learning and helping teachers facilitate the process of language ac-quisition.

María was born in Mezquitíc, Jalisco. Since she was in high school she has enjoyed working hand in hand with the community, which is why she applied for a scholarship for community leaders to study in New York through the SEED program by USAID, where she continued to perform in social work during her stay in US, receiving recognition from “The President’s Volunteer Service Award” led by “The Corporation for National and Community Service” (CNCS). 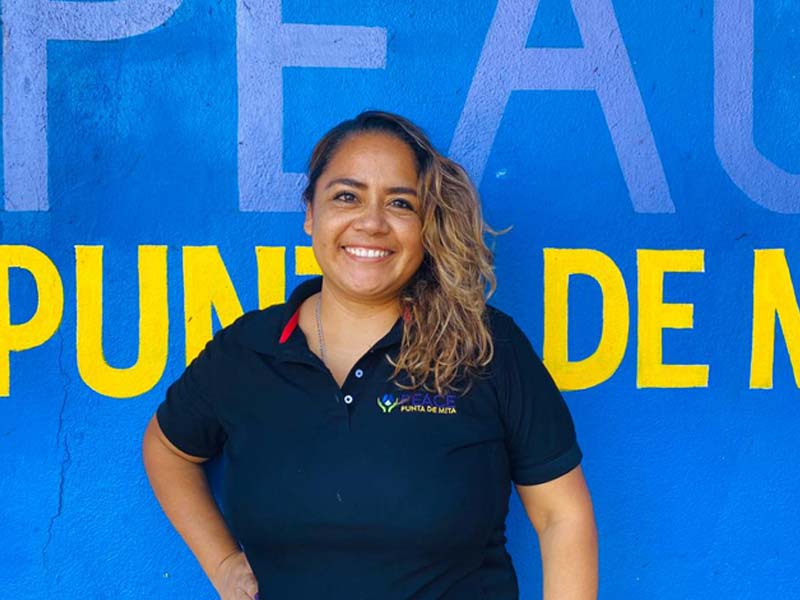 Lulú is originally from Nayarit. She has lived in the Bahía de Banderas area for 12 years, joining the PEACE Punta de Mita team in 2015 to oversee our Community Center, Casa Campesina. Lulú is a fundamental piece to the success of our organization as she is great support for the students. 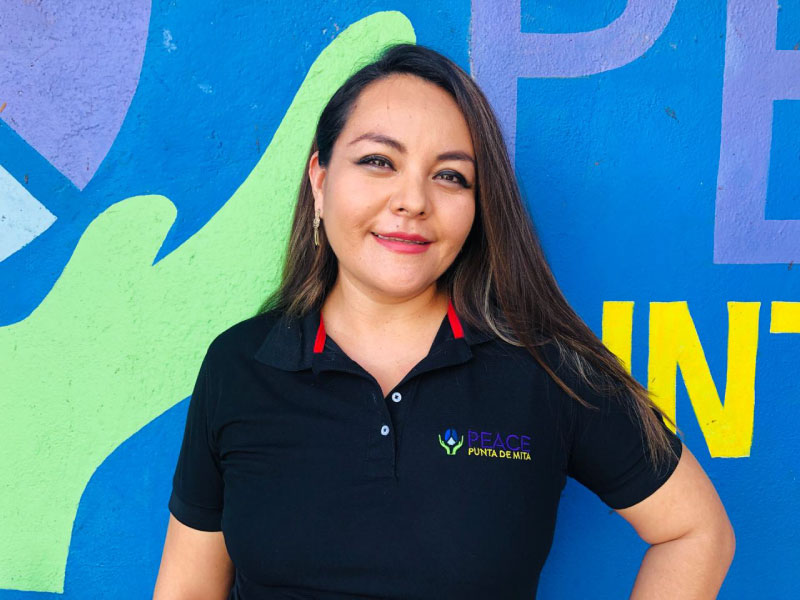 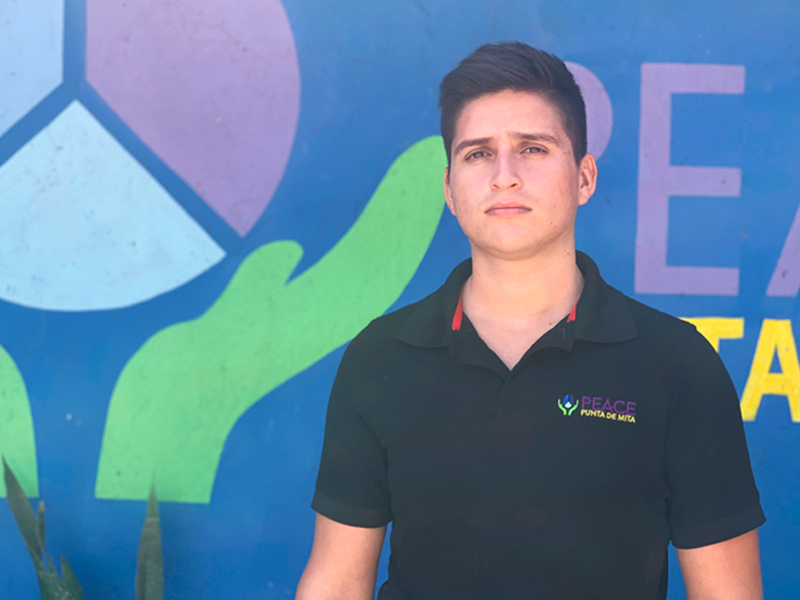 Alexis was born and raised in Puerto Vallarta, México. He obtains his law degree in 2018 at the University of Guadalajara (UDG). He is certified in English by TOEFL and The Trinity College London. He first joined PEACE in March 2015, and after three years in China teaching English and working in other administrative positions, he returned to take charge of the educational reform of English Program. 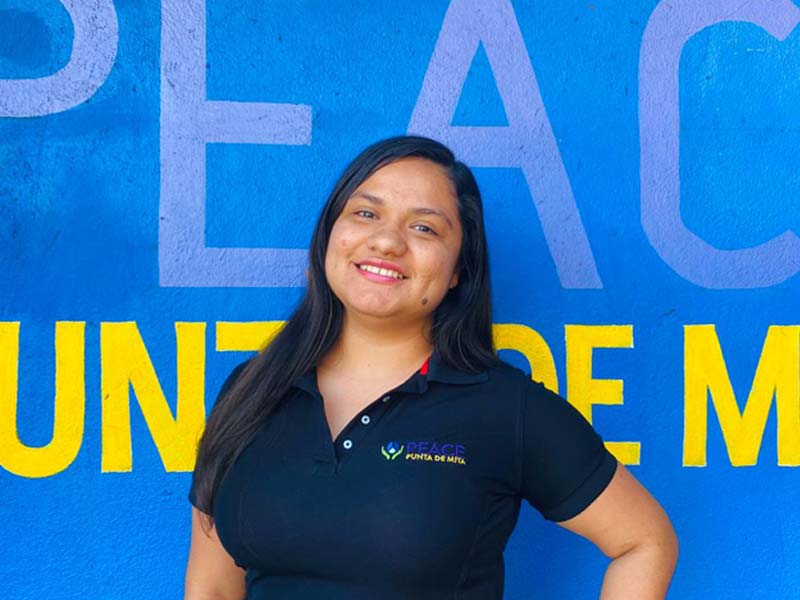 IT Teacher and Programer

Ana grew up in California. In 2000, she settled in Punta de Mita and taking interest in new media, Ana took to studying technology, specializing in Web Page Design at the UTBB in Nuevo Vallarta. Ana teaches students about various computing programs such she feels are essential for their career advancement. 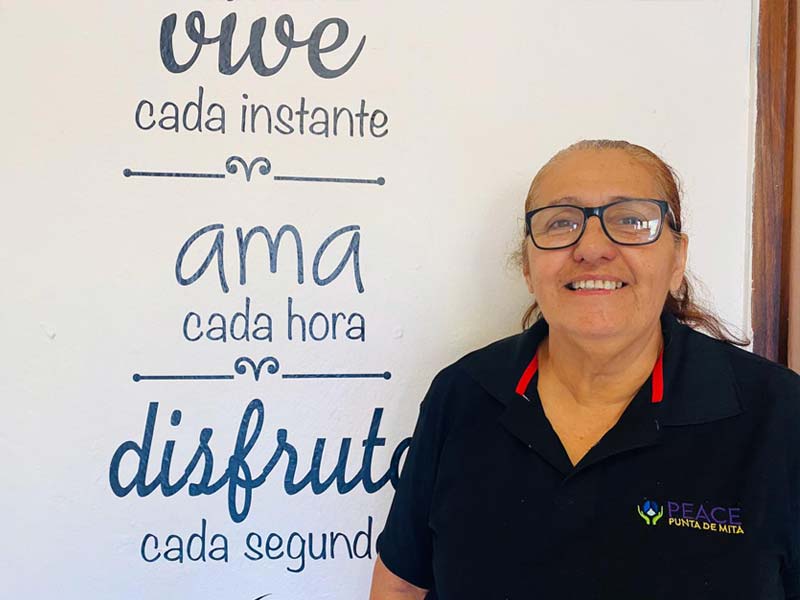 Carmen was born in Nayarit. She obtain a degree in social sciences and a master’s degree in special education. Carmen is a retired kindergarten and elementary school teacher by profession but remains active assisting and counseling PEACE teachers due to her extensive years of experience and vast knowledge in the educational area.

Facilitate local development based on self-reliance, self-sufficiency, and with active participation of the local community of Punta de Mita through effective program implementation and delivery in three community service categories: Education, Community Pride and Health/Lifestyle.

Support the sustainable growth of the communities located in the Punta de Mita area, with active participation of the community through educational, health, and social cohesion programs. 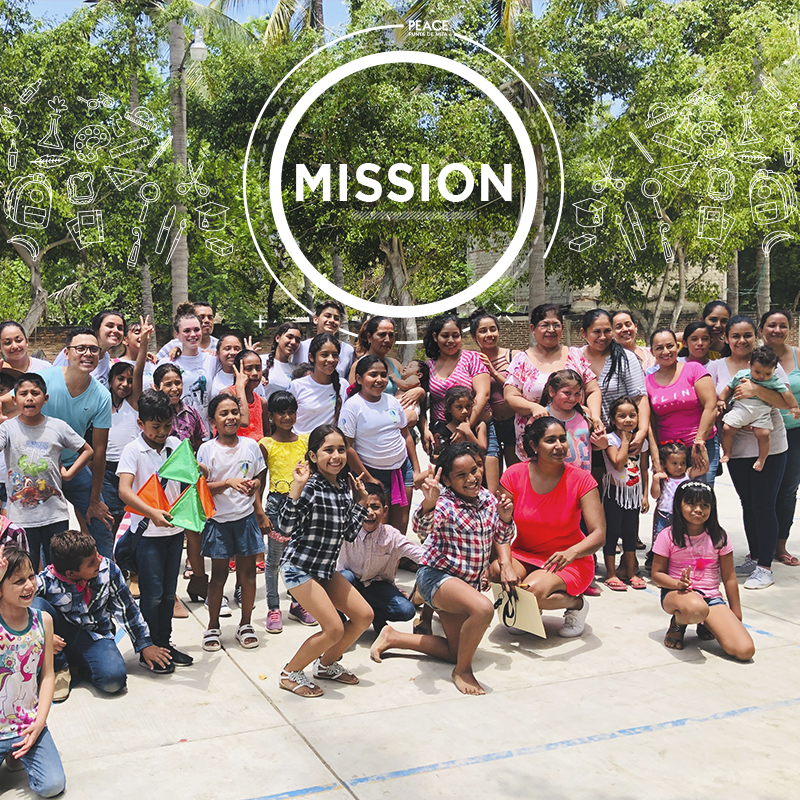 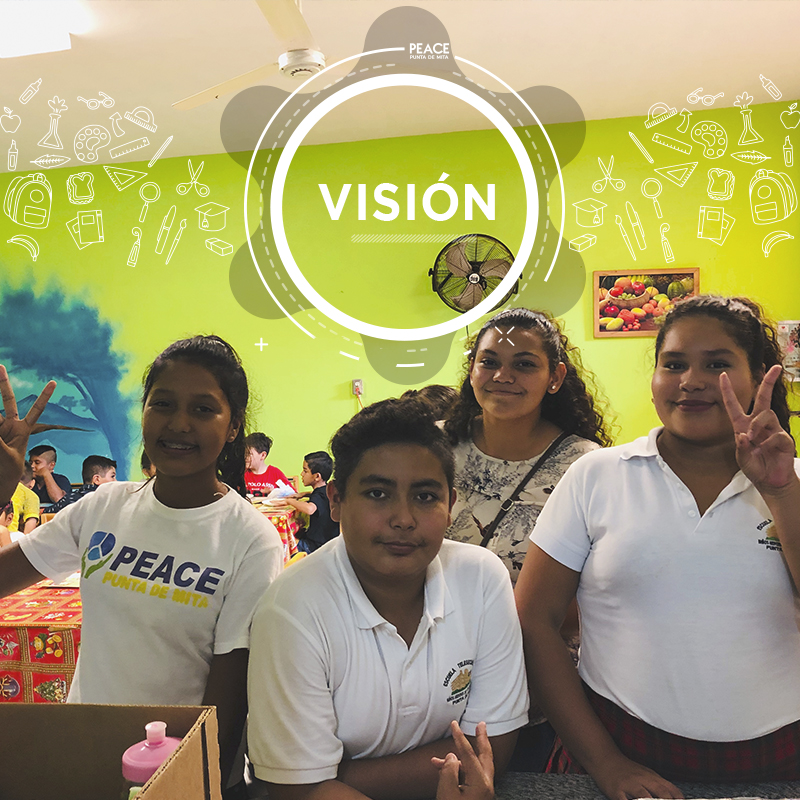